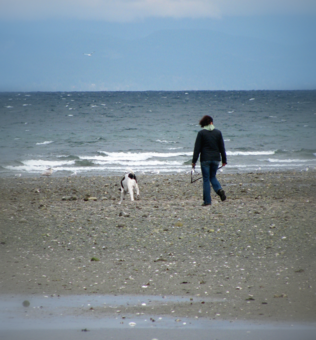 Upon finishing her studies in Fine Arts, Jennifer Hedge began working full time in theatre as a scenic artist at venues such as the Vancouver Playhouse, Banff Centre, and Calgary Opera. Over the past 27 years, sets painted by Jennifer have been enjoyed by audiences throughout North America, and she has earned recognition as one of the best in her field.

After an extended hiatus from pursuing her own artwork, Jennifer returned to painting and drawing in 2007. She is influenced by the painters of the Romantic movement and their expression of personal ideas and visions – the way in which the creative act was governed by imagination rather than convention. She finds the paintings of Turner, and the way he brought his appreciation of nature to his art, particularly compelling.

Jen's main inspiration comes from nature:  Open beaches. Turbulent seas. Deep and haunted forests. The impact of humanity on wild places, and the creatures which inhabit those places, is a recurring theme throughout much of her artwork.